“I called on him for everything he had, and he delivered,” said Larson. “[NRHA Million Dollar Rider] Brian Bell helped me with his turn-arounds, which could well be why he turned so fast, and I had a hard time controlling him, but I have to thank Brian for that. Wimpys Little Chic [Gunnabeabigstar’s dam] is the epitome of a great reining horse and what she is doing as a producer is incredible!” ARC Gunnabeabigstar is also an NRHA Markel Insurance Futurity Sales graduate.

YOU CAN WATCH HIS RUN HERE!! 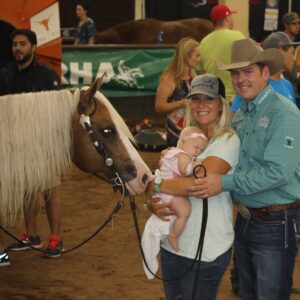